Eyelid skin is extrMany practitioners still use the conventional scalpel or laser scalpel to correct unsightly, ageing eyelids. The development of soft, non-invasive — such as non-surgical techniques including medical blepharoplasty — open the possibility for new cosmetic procedures.

Now, innovative medical devices using plasma technology have been offered as an alternative to surgery. Plasma is a gas that has been ionized by electric discharges. This energy is dissipated as heat in the targeted cells in order to tighten the eyelid skin while respecting the surrounding tissue.

Both doctors and patients searching for a less invasive means to rejuvenate the appearance of the eye are becoming more and more interested in the use of plasma as it presents numerous benefits. It is an outpatient intervention, with no skin contact, no incision, usually associated with topical anaesthesia and with a short recovery time (5 days on average). Moreover, it does not bear any risk of scaring. Launched in France in 2016, the Jett Plasma Lift Medical (JPLM, Compex, spol. s r.o., Czech Republic) is the latest generation plasma discharge device providing a ‘lift’ effect. Currently, this device is the author’s preferred choice.

JPLM supplies a safe, high voltage direct current source and has an applicator with an active electrode. The active electrode with an ultrafine point, in the doctor’s hand, is placed near to the skin but is not in contact with the tissue in order to obtain a thermal effect. Each discharge (shot) of Jett Plasma locally increases the electrical tension of the cellular membrane which then tightens. The treatment zone tightens through successive micro-impacts and erases small wrinkles.

The purpose of this retrospective study was to report the author’s experience treating slightly drooping or wrinkled eyelids using JPLM.

This was a retrospective data review from patients treated with JPLM between October 2016 and February 2017. Suitable patients had to be adult with mild to moderate sagging eyelids, not associated with fat pockets in the lower eyelid or with periorbital wrinkles. Moreover, patients suffering from xanthelasma, a frequently observed pathology resulting in cosmetic discomfort due to cholesterol deposits on the eyelids, patients of Asiatic origin wishing to ‘westernize’ their eyes, or patients who did not wish to undergo a surgical procedure or who presented contraindications to surgery were suitable for the procedure. Prior to any treatment, patients had to sign a written informed consent.

Patients with an ongoing anticoagulant treatment, wearing pacemakers or metallic objects in the treatment area such as piercings, suffering from epilepsy, pregnant or breastfeeding women, or with an infectious skin disease on the treatment zones, or patients who were exposed to tanning beds, natural sunlight or who had high skin phototypes (to avoid any hyperpigmentation problems) were not suitable for the procedure.

emely fine, highly mobile, and undergoes a great deal of stress from daily blinking. This is the reason why the area around the eyes is the first to show signs of fatigue and ageing. Even if ageing is inevitable, external factors exist which aggravate or precipitate this phenomenon, such as tobacco and sun exposure, which are the skin’s worst enemies.

Over time, the very thin skin around the eye contours develop wrinkles and lose their elasticity and firmness. Eyelids become heavy, progressively droopy, fat pockets appear in the lower eyelids, and expression lines (dynamic wrinkles) become visible, particularly at the outer corners of the eyes. The aim of blepharoplasty is to eliminate or reduce these palpebral imperfections to make the eyes look more relaxed and younger.

The procedure was carried out on an outpatient basis, using a  topical anesthetic cream or via inhaled medical gas which is breathed in to provide short-term analgesia.

This medical device has been described in detail in one of the author’s previous articles, including its mechanism of action and the proposed clinical protocol1. This is why only the important points are recalled in Table 1. 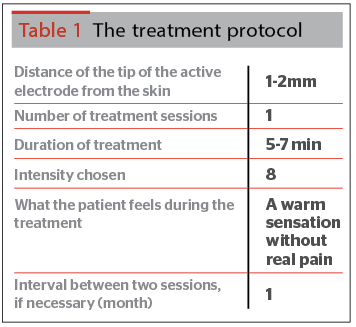 A first consultation was scheduled in order to provide the patient with all the information concerning the procedure, obtain the signed consent, and to check that there were no contraindications. During this consultation, a dermatological examination to measure the skin folds was carried out by the doctor and photos were taken for reference. A follow-up consultation was planned one week later, and a final control visit took place 3 months after the procedure to assess the treatment outcome.

The global efficacy of JPLM was assessed through the measurable tightening of the fine skin of the eyelids (principal criteria), the comparison of photographs taken before and after the procedure, and the patient satisfaction regarding the treatment.

As any medical act, some transient local reactions may be observed with JPLM. However, recovery is usually simple, with erythema observed for about two days, small scabs three days following the erythema on the treated zones, which could be covered using make-up, and palpebral oedema. A short-lasting corticoid and Extranase (Laboratoire Meda Pharma, Paris) based treatment was prescribed in order to prevent the quasi-systematic postoperative oedema, as well as a local treatment to enhance healing after treatment. Patients were strongly advised to avoid any exposure to the sun and to protect themselves from sunlight using an effective, high-SPF sun cream for about 3 days on average. The author recommends wearing sunglasses for a few days after the procedure.

This retrospective study included 38 patients: 34 women and four men, with an average age of 48. Patients mainly presented heavy and drooping eyelids. One Asian patient was treated with this device to look more ‘Western’.

An improvement in the drooping eyelids was effective in the majority of all patients, without altering their essential functions and with no risk to the eyes. A tightening of the skin of approximately 2 mm was observed by the practitioner. Globally, patients were satisfied with the cosmetic result, providing them with a more open and, therefore, younger look. Only three patients had poor results, while four patients had an interesting but weak result and, therefore, undertook a second session.

Local tolerance was good in almost all patients. Common adverse events observed for all cosmetic procedures were observed. Erythema, small scabs on the area treated and palpebral oedema were the main adverse effects noted. All were mild and short-term reversible. Only one patient presented erythematous zones lasting for approximately three weeks. Hyperpigmentation appeared in the Asian patient which regressed after depigmentation therapy. No irreversible side effects such as scars, burns were observed. 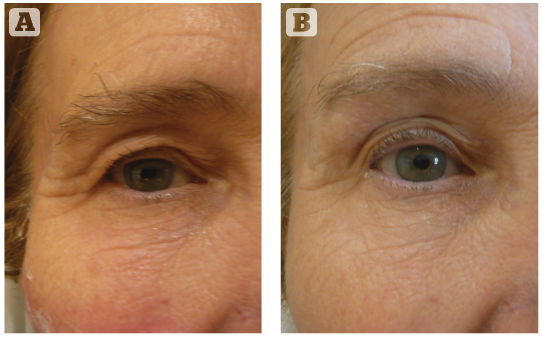 Over the last decade, ‘plasma medicine’ has known spectacular developments, particularly for disinfection, healing of wounds, and treatment of ulcers. As reported above, plasma is obtained through the excitement of this gas by supplying electrical energy which can then be applied to the skin without causing damage2–4. In cosmetic dermatology, the use of such plasma allows the treatment of small lesions or skin imperfections such as acne scars or warts and to perform a medical blepharoplasty.

It seems as if there is a significant consensus in the medical community specialized in cosmetic interventions for a non-ablative procedure with no direct contact with the skin, which is both efficacious and safe, using plasma technology. The introduction of the Plexr® (PLasma EXeResis, GMV s.r.l, Italy) first appeared on the market in 2014.

This medical device provides an option by vaporizing the most superficial layer of the epidermis, removing the palpebral xanthelasma and erasing the peribuccal wrinkles without scarring or incision5–8. However, it does not induce any collagen renewal reaction. Hence, JPLM may be considered an alternative.

To assess its efficacy, the author voluntarily limited the field of application to the eyelids for three principal reasons:

Requests for soft and non-aggressive blepharoplasty to rejuvenate the appearance of the eyes are continually increasing because patients often struggle aesthetically with ageing eyelids. As it generates a very precise and fine (1 mm2) plasma jet, which vaporizes specific cutaneous cells, it is perfectly adapted to the treatment of the area around the eye, which is the most delicate and most fragile part of the face. There is no danger for the eyes and surrounding tissue.

It is the only device which operates using direct current. The application of direct current for a brief time generates a local depolarization. This depolarization induces an opening of the ion channels present in the cell membranes which modifies the way in which the electrical charges are distributed on either side of the cell membrane. The membrane potential (or electrical tension) of senescent cells in the skin is restored. The skin gradually becomes firmer where the wrinkles and cutaneous sagging had previously become established.

It reactivates the local fibroblasts, thus increasing synthesis of elastic fibers and collagens by heat transfer in the dermis.

Through this retrospective study, JPLM confirmed the primary efficacy criterion investigated, the skin tightening and redensifying of the upper and/or lower eyelids marked by moderate ageing within 3 months after treatment.  It rapidly gave visible results, particularly a younger look, less tired and after only one session of treatment; it was safe with no major side-effects. 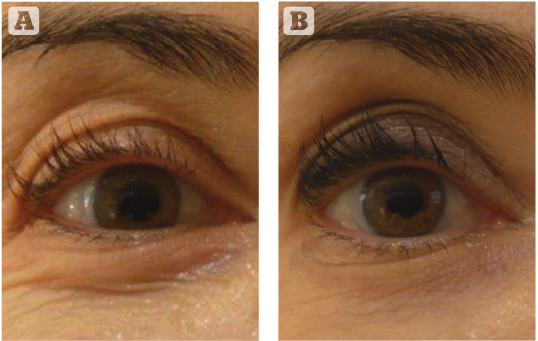 Only two unsatisfying results were observed because treatment intensity was insufficient for the first treated patients.

Two cases of unusual side-effects were observed: one patient presented erythematous zones for a period of three weeks after the procedure and the Asian patient had post-therapeutic cutaneous hyperpigmentation. As Asian skin has a higher risk of hyperpigmentation, we now systematically prescribe a depigmenting topical agent to help prevent these marks after treatment.

Even though one session may be considered in the majority of cases, for individual patients, a second, even a third session with an interval of 1 month may be necessary to perfect the result. Moreover, due to a potential insufficient treatment outcome, the procedure should not be used in patients with excess skin on the eyelids or who have bags under the eyes, as these cases require surgical correction.

This study has certain limits, mainly due to its retrospective monocentric character, its limited number of patients, the lack of real hindsight and spare literary data1.

Moreover, to date, the collagen renewal induced by the heat which is lightly diffused in the dermis has not been validated on the basis of histological criteria. But, it is well-known by physicians practising radiofrequency and micro-focused ultrasounds, which heat the zone to be treated to tighten the skin. Even though JPLM is an interesting technique opening new perspectives, it still needs to be confirmed in the cosmetic domain. The present results remain insufficient and must be confirmed by more extensive studies.

Moreover, even though its use seems to be simple in the target zones, it should be limited to trained medical doctors to avoid any significant and irreversible side effects.

Considering the present results, the author continues to offer treatment with JPLM to patients, preferentially under the age of 50, who suffer from slightly droopy or creased eyelids, but who do not have fat pockets. Blepharoplasty using JPLM is an efficacious and safe alternative to surgery, offering long-lasting results but it does not stop the physiological changes that take place in ageing skin. Its indications remain limited to patients with mild to moderate wrinkles and skin laxity on the eyelids. From these encouraging results which prove the real potential of this latest plasma technology device, we shall pursue its evaluation on a greater number of patients.

In conclusion, the practitioner’s choice of plasma technology device depends on their personal opinion, professional experience and results. For the reasons set out above, the author feels it is justified to prefer the JPLM for non-surgical blepharoplasty, which provides patients with predominantly positive and satisfying results after one session in the majority of cases, in selecting suitable candidates for this treatment modality.