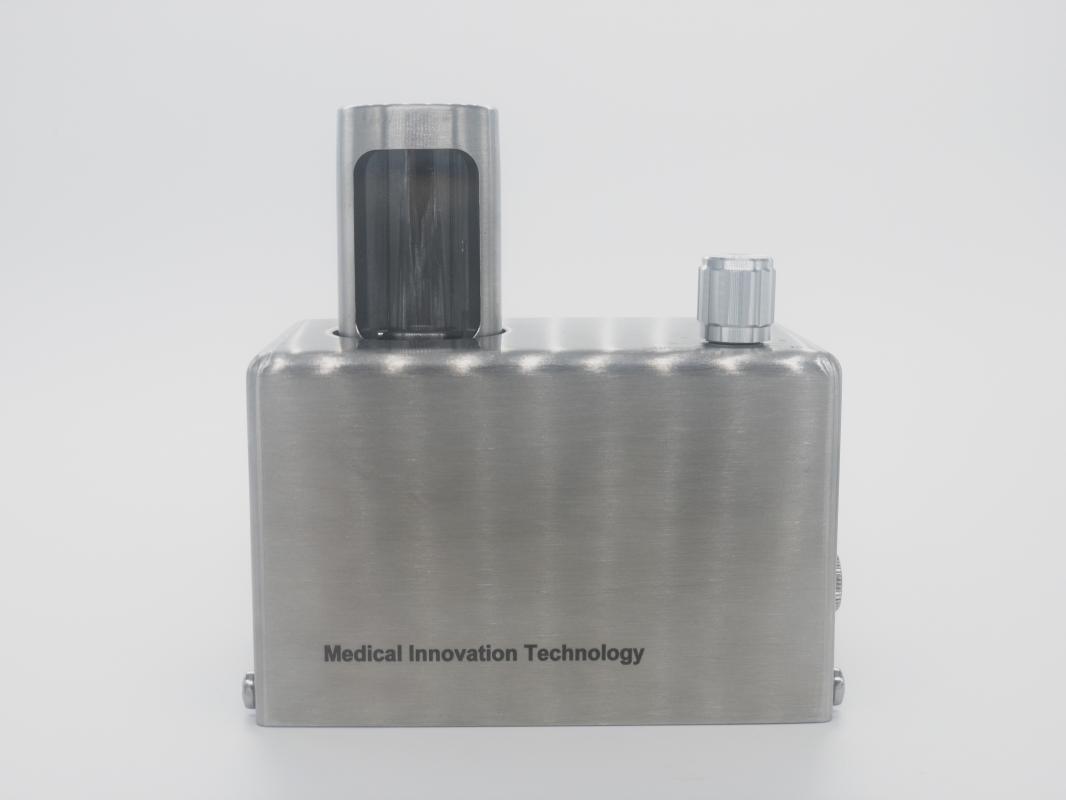 Elma Lipo is a new revolutionary device for fat reduction. It is used for the procedure of nano lipofilling. Basically for skin regeneration using patient`s own fat.

Elma Lipo is a proprietary invention of the company Medical Esthetic and its head Natalia Markova, who is the owner of a patent for this device issued by the Czech industrial property office in July 2019.

The device is an innovative solution for releasing human fat from cells and purifying it for further injection into the dermis and subcutaneous tissue. The device allows you to manipulate adipose tissue without violating sterility: the material is collected and crushed in a single syringe without opening the test tube.

- Easy to use
- Efficiency
- Portability
- Guarantee of sterility of the collected material
- The device is compact, easy to carry, safe and maintenance-free.

Nanofat grafting — a new regeneration method of the skin, subcutaneous fat and extracellular matrix. The main problem with this procedure is the preservation of adipose tissue during implantation. Medical Esthetic and its chief Executive, Natalia Markova, have solved this problem by developing a revolutionary fat-crushing device, Elma Lipo.

Elma Lipo grinds adipose tissue, preserving its sterility and not damaging the cell membrane. Engraftment of adipose tissue processed in Elma Lipo occurs as efficiently as possible. The regeneration process after the procedure continues for another 10 months.

The first work with adipose tissue dates back to the end of the 19tРh century, or rather to 1889, when the first autotransplantation of fat was performed. In 1974, Italian gynecologist Giorgio Fischer invented liposuction, describing a method for removing adipose tissue using a hollow cannula. In 1985, California dermatologist Dr. Jeffrey Klein developed a special tumescent solution designed to fragment adipose tissue with minimal damage.

English surgeon Sidney Coleman at the end of the XX century developed the concept of lipofilling, which meant maximum preservation of purified donor fat tissue and its delicate transplantation. Up until the end of the first decade of the twenty-first century, the collection and transplantation of adipose tissue were the domain of surgeons. Recently, dermatologists and cosmetologists have become interested in the potential of adipose tissue.

The fact is that intact adipose tissue is a self-renewing, rich in blood vessels, a structure that includes adipocytes — stromal vascular cell fraction, a cell complex that contains stem cells, endothelial, smooth muscle cells of blood vessels, cell precursors — fibroblasts, blood cells, T and B lymphocytes. Adipose tissue is an endocrine organ that stores our energy. And for dermatologists and cosmetologists, it is an excellent source of stem cells. One cubic centimeter of adipose tissue contains 100 times more stem cells than 1 cubic centimeter of bone marrow. All this gives a wonderful regenerative effect.

It is important to emphasize that speaking about the method of nanofat grafting today, we do not invade the area of responsibility of surgeons. We are not talking about reducing any unnecessary volume, nor the filling of the tissues. You need to clearly understand that nanofat grafting is not related to the method of nanofat grafting . If you need to increase the volume in the cosmetology room, we use traditional methods, such as: hyaluronic acid, polycaprolactone, calcium hydroxyapatite and polylactic acid. Thread methods are suitable for fixing fat packages. The method of nano fat grafting is used by dermatologists to create a regenerative, anti-aging effect, which narrows the pores, evens out the tone, the skin is tightened, smoothed and begins to glow from the inside. It is like a photoshop effect, or glow face.

Procedure nanofat grafting requires strict adherence to Protocol and compliance with the procedure phasing. First of all, it is the patient s choice. Indications for the procedure are age-related lipoatrophy, flabbiness and loss of skin elasticity. Nanofat grafting allows to achieve regeneration of cells, extracellular structures and ligaments. It is important to understand that the transplantation of fat grafts (parts of tissue) should take place horizontally, close to the reticular layer of the dermis, in very small doses. This is done for better cell survival. This is how nanofat grafting is different from lipofilling. With nanofat grafting, adipose tissue can be decomposed very carefully and achieve not only a significant renewal of the intercellular matrix, but also additional vascularization, improved respiration and cellular nutrition of the skin.

There are different ways to transplant and process adipose tissue. For nanofat grafting adipose tissue must be crushed. This can be done through filters or a centrifuge.

However, since stem cells were discovered in adipose tissue in the early 2000s, researchers around the world have been trying to develop devices that allow these cells to be isolated from fat during liposuction. It is assumed that thanks to stem cells, the transplanted adipose tissue will take root as effectively as possible and contribute to the regeneration of surrounding tissues.

In 2019, the Czech company Medical Esthetic developed the Elma Lipo device, which grinds fat while preserving its cellular structure. The patent for the development of the device belongs to the head of the company Natalia Markova and Czech doctor Milos Kravciv. This device allows you to manipulate adipose tissue without disturbing the sterility of the material. Fat is collected and crushed in a single syringe without opening it.

Research conducted by the Professor of pathology 3rd medical faculty Charles University, Joseph Shah, Czech Dr. Elena Furdetska together with the Russian colleagues-patomorfologia/histologists, show that in the treated in Elma Lipo adipose tissue are stromal lintel and the remains of vessels, that allows to preserve and stabilize the spatial orientation of the transferred tissue, which further improves the formation of structural functional units of adipose tissue, and development of collaterals and anastomoses, which are the basis of the projected high percentage of healing. The method ensures the safety of the cell membrane and nucleus. The cells remain alive and completely functioning, which suggests that their engraftment will be maximum.